Archive for the ‘Cars’ Category

But Morris has value
Over all of these things
A classic amongst engines
For it’s the joy that he brings
From just being Morris
And the miles he has run
The twinkle, the laughter
And all of the fun

So next time you meet Morris
Or another model like him
Be kind, be compassionate
Take time, sip a gin
Or a whiskey and listen
To his tales and take note
For Morris might now be parked up
But he still gets my vote!

Back To School Traffic

Queues, cones and chaos
The three ‘c’s’ of traffic jams
Holding up a journey
As roads are over crammed

There are sentries on our roads
All dressed in red and white
That line the highways mile on mile
Without giving insight
As to a reason why they’re there
For in their loyal rows
The empty passage t’other side
Leaves us out of the know
For it appears they simply stand
On guard biding their time
In conical formation and
With no reason and no rhyme!
Saluting all the traffic
As it just trundles by
The cones directing queues of cars
To jam! Oh how I sigh!

Then with a roar of engines
A stench of burnt out fuel
He sped off down the road so fast
But left looking a fool!

An extreme example of “Ricer;” a Toyota Corolla dressed up as the Poser Mobile for the T-Mobile TV ads. However the originator of the pic wishes to remain anonymous. (Photo credit: Wikipedia)

The landtrain set in motion
That some may call traffic
A chain of cars that go nowhere
And make me feel quite sick! 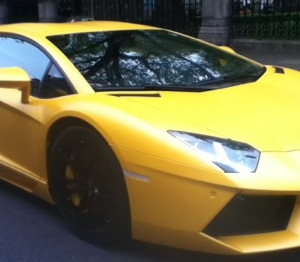