And with whistle sounding loudly
With a surge so hard and strong
She engraved her name in history
Forever her swan song. 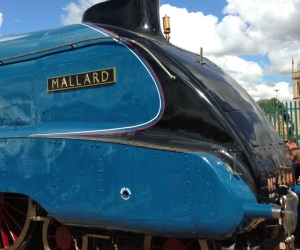 The Mallard celebrating the 75th anniversary of the speed record being set just south of Grantham at Stoke Bank when the A4 Class steam locomotive hit 126mph on 3 July, 1938.